DOWN BUT NOT OUT IN TAX FIGHT

All for massive giveaways to corporations and the wealthiest!

The Senate passed the tax bill WITHOUT regular order, debate, or committee hearings. There was no time to review or digest the bill, which was changing until the final hours. House Speaker Ryan has signaled that budget cuts—to reduce the deficit—are the next step.  https://www.usatoday.com/story/news/2017/12/02/handwriting-wall-and-page-senate-passes-tax-bill/915957001/

We’re down but not yet out!

Republicans have said that they will convene a conference committee to combine the House and Senate versions. However, the House could just as easily pass the Senate version—as early as TODAY.
https://www.politico.com/story/2017/12/02/tax-reform-whats-next-201078

We need to fight back as the Tax Scam heads to conference. Call to thank Democrats in our delegation for fighting hard and urge them to keep going.

This is a Republican-made, Republican-passed bill. Elections are coming soon. Republicans own the Tax Scam and they must be held accountable.

**ACTION 1: Call our Senators and Congressman Walden **
(Leave a message if you can’t get through.)

SAMPLE SCRIPT SENATORS MERKLEY AND WYDEN:
“My name is [–] and I’m a constituent from [city], Oregon [zip code]. I am calling to thank you for opposing the disastrous tax scam bill. We may be down but not out. I ask that you continue to fight this bill with everything you have. Thank you.”

SAMPLE SCRIPT FOR CONGRESSMAN WALDEN:
“My name is [–] and I’m a constituent from [city], Oregon [zip code]. I am calling to express my complete opposition to the tax bill. The process has been blatantly undemocratic and will seriously hurt the economy. This is your last chance to put people before party, come to your senses and stand up for the vast majority of Oregonians in District 2 who will be hurt by this bill. Do what is right and vote NO. We will remember your vote in November. Thank you.”

Share this post with friends and family in every state. Ask them to call their Members of Congress. We may be down, but we are still fighting. Stand up! Make noise! Make our voices heard!

The ORD2 Indivisible 2018 calendar is sure to INSPIRE your participation in DEMOCRACY and is available for only $20.00!! Our amazing photographers got together to select 13 photos from their HUGE collection to create this awesome calendar just in time for the holidays. We will be taking calendar orders until December 15th. If you would like to order a calendar, please mail a check to:

With your check please include your name and address. To avoid paying postage, we will post pick up locations and opportunities after December 22nd. 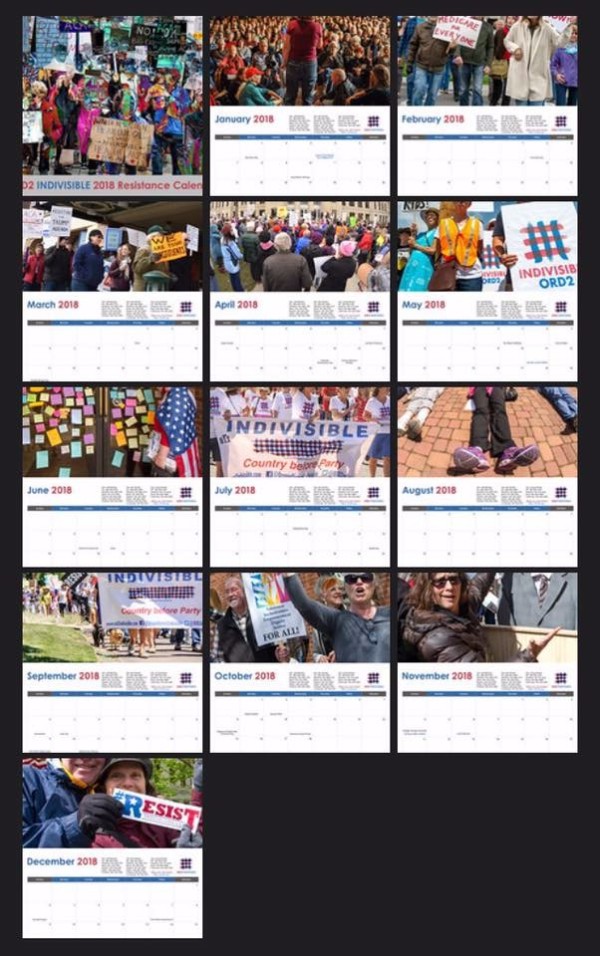 A Special Call to Action: WE NEED YOUR HELP!